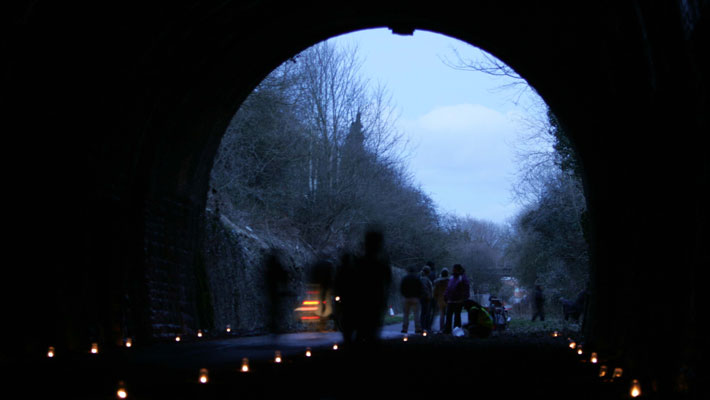 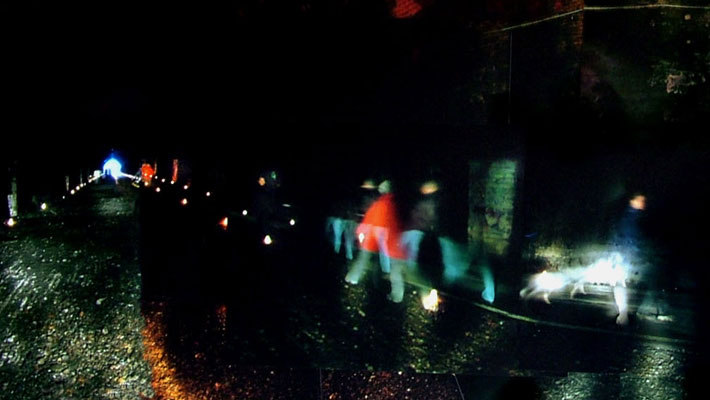 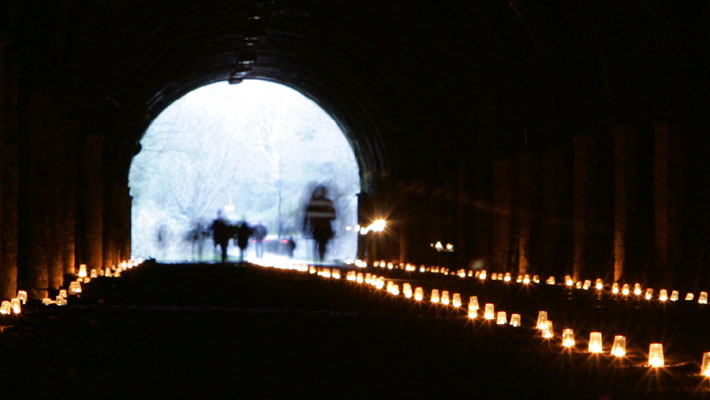 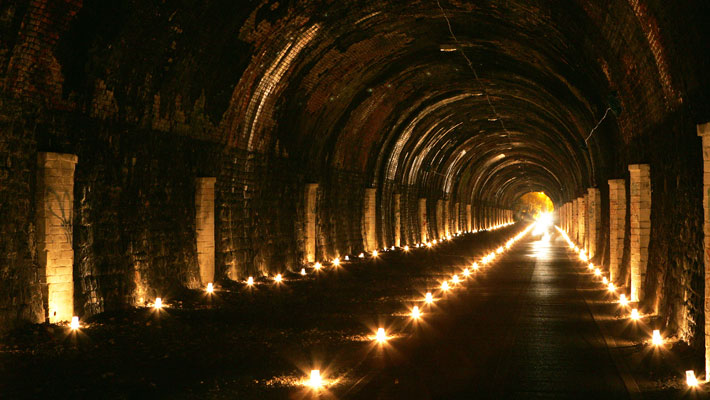 Tunnel Vision was a Brunel200 commission and collaboration between Luke Jerram and composer Dan Jones.

In the 1/2km long dissused railway tunnel of Stapelhill Bristol, Tunnel Vision was a fusion of architecture, candlelight, surround sound and the visiting public. A vast array of speakers were mounted in the ceiling of the 8m high tunnel, lit at night by over 500 candles.

Considering the problems faced by Brunel with his failing project the Atmospheric Railway the artwork aimed to evoke the imagery experienced in worry and problem solving as he lay in bed at night on the edge of sleep. An atmosphere of the industrial age was created with sound and a beautiful sense of loss was described through music. Through the use of surround sound, trains appeared to move along the length of the disused railway track passing through any visitors present.

” When the train came we couldn’t help but get out of the way. The atmosphere is absolutely magical” said local resident.

With 4,400 visitors over 7 nights the installation was a great success. Many people came by chance curiously following lines of people as they walked to the artwork at dusk. Crossing social boundaries word spread about the artwork amongst the local community. Some of the same families came night after night and on Saturday evening well over 1000 people attended.

“It gave me the colly wobbles” Carol age 70

Tunnel Vision is the first of a series of tunnel artworks. See St.Gabriel’s Garden for another.

Tunnel Vision was inspired through research into the Atmospheric Railway at the Brunel archive at the University of Bristol . This was a new type of train developed by Isambard Kingdom Brunel. Tested in the South West of England the trains were literally sucked along by vacuum. The vacuum was created in a long pipe which lay inbetween the tracks. But the project failed for a number of different reasons including the fact that rats ate the leather seal on the air tight pipe. Trains broke down and horses often had to be brought in to pull the carriages.

Like most entrepreneurs fear of failure and financial ruin are forces to be battled with. Ultimately for Brunel the stress and worry of the Atmospheric Railway and his ship The Great Eastern led to his premature death at the age of 53.

Tunnel Vision was featured on BBC television. A Brunel200 radio programme can be heard here. Photography by Mark Simmons.