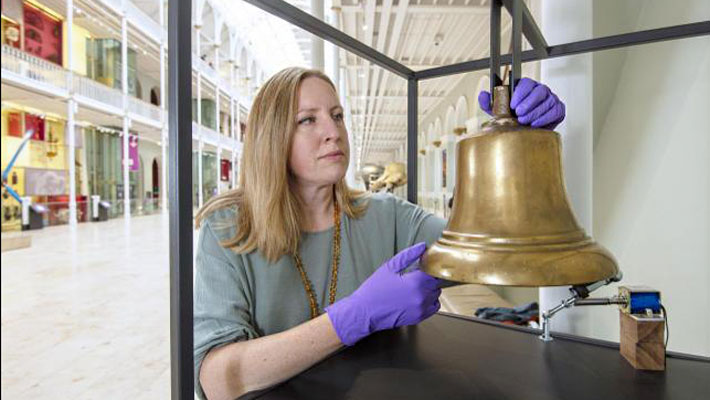 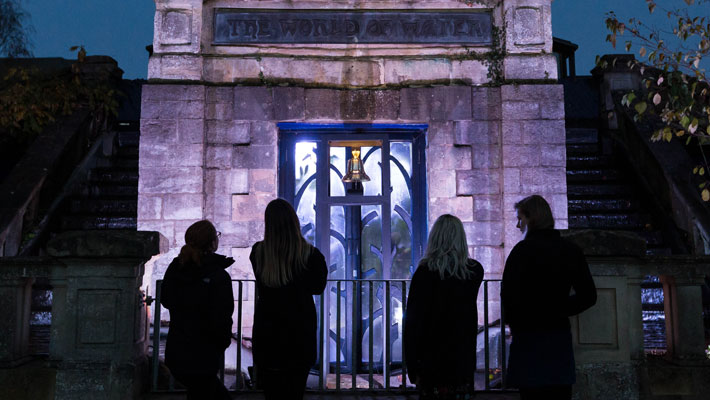 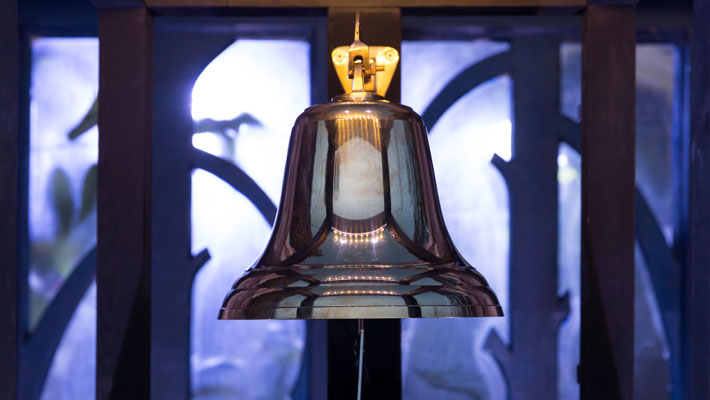 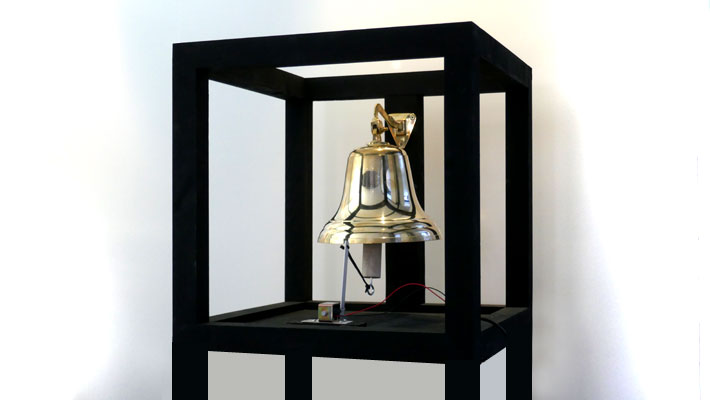 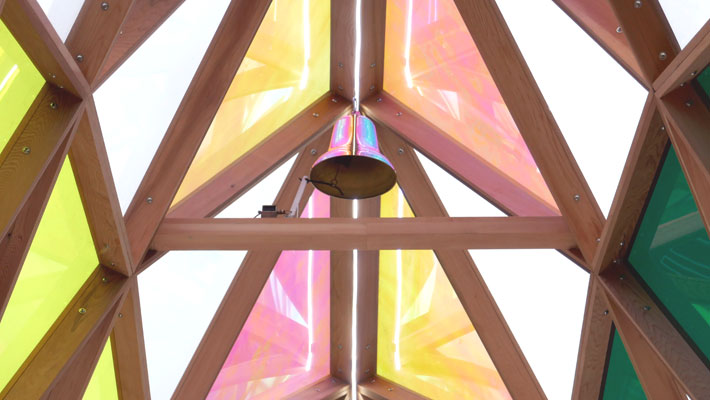 Presented as part of the Palm Temple, London. 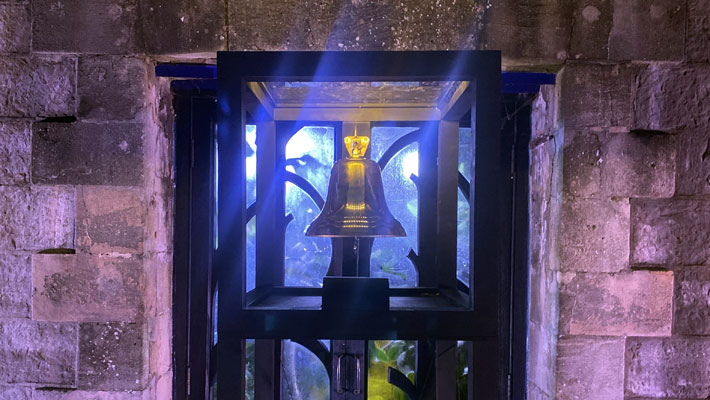 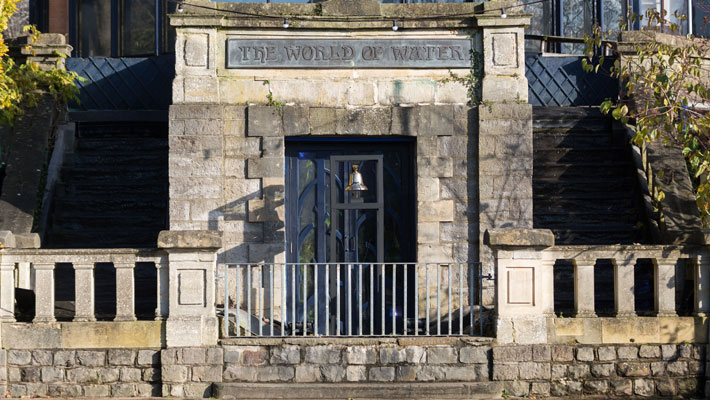 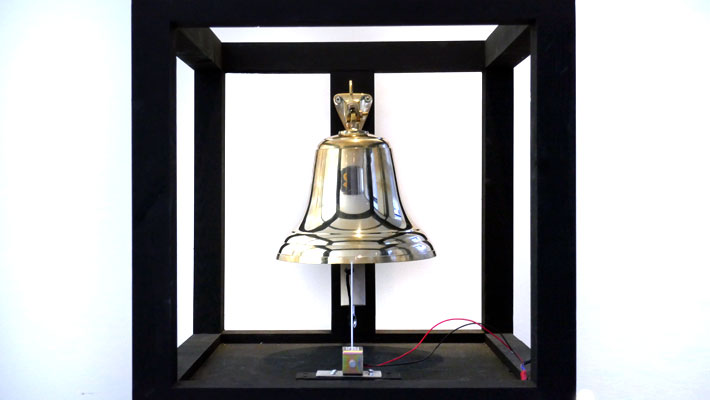 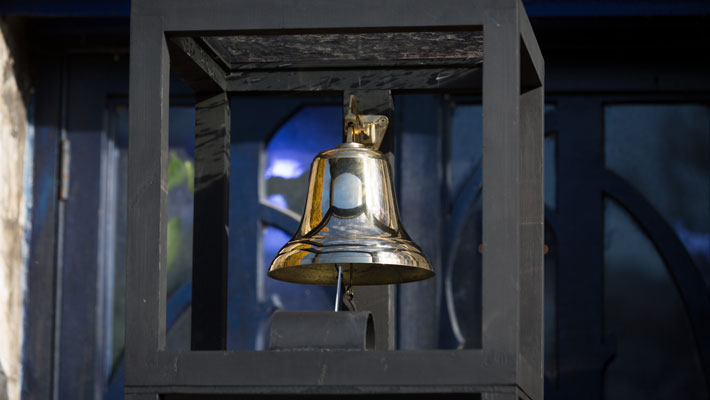 The Extinction Bell tolls once, 150-200 times a day, at random intervals, indicating the number of species lost worldwide every 24 hours*.

The Extinction Bell artwork will tour, to be presented in a number of different venues and contexts, including museums of natural history, botanic gardens and zoos. The artwork will be used to raise awareness of the issue of biodiversity loss, and alter the way audiences view existing collections and exhibits within these institutions.

The latest presentation of the artwork is at the National Museum of Scotland, where they have converted a fire engine bell from their collection into an Extinction Bell.

This simple artwork aims to make audible events which are invisible to us, and which are occurring simultaneously across the world in multiple habitats.

*Estimate according to a 2007 UN Environmental Programme.

Scientists estimate that the current extinction rate of plant, insect, bird and mammal species is nearly 1,000 times the ‘natural’ or ‘background’ rate and, say many biologists, is greater than anything the world has experienced since the vanishing of the dinosaurs nearly 65 million years ago.

Unlike past mass extinctions, caused by events like asteroid strikes, volcanic eruptions, and natural climate shifts, the current crisis is almost entirely caused by us — humans. In fact, 99 per cent of currently threatened species are at risk from human activities, primarily those driving habitat loss, introduction of exotic species, and global warming. Because the rate of change in our biosphere is increasing, and because every species’ extinction potentially leads to the extinction of others bound to that species in a complex ecological web, numbers of extinctions are likely to snowball in the coming decades, as ecosystems unravel.

Read this latest UN report from 2019.

As questioned by the BBC, it is hard to verify this number of extinctions, as firstly we don’t actually know the number of species there are on the planet to begin with. “Current estimates of the number of species can vary from, let’s say, two million species to over 30 or even 100 million species,” says Dr Braulio Dias, executive secretary of the Convention on Biological Diversity. “So we don’t have a good estimate to an order of magnitude of precision,” he says. But the fact that the precise extinction rate is unknowable does not mean that the problem is imagined. Read more…

Here is another story from Yale about why the estimates vary.

A “biological annihilation” of wildlife in recent decades means a sixth mass extinction in Earth’s history is underway and is more severe than previously feared, according to research.

Scientists analysed both common and rare species and found billions of regional or local populations have been lost. They blame human overpopulation and over consumption for the crisis, and warn that it threatens the survival of human civilisation, with just a short window of time in which to act.

Read about in The Guardian.

All around the world, bells are used as a universal call to action and communicate a sense of emergency. Bells are also commonly used in religion, bringing communities together for services. When a bell tolls it rings slowly and repeatedly, often as a sign that someone has died. With all these cultural references it made sense to use a bell in the artwork as a way of marking the numbers of species we are losing each day.