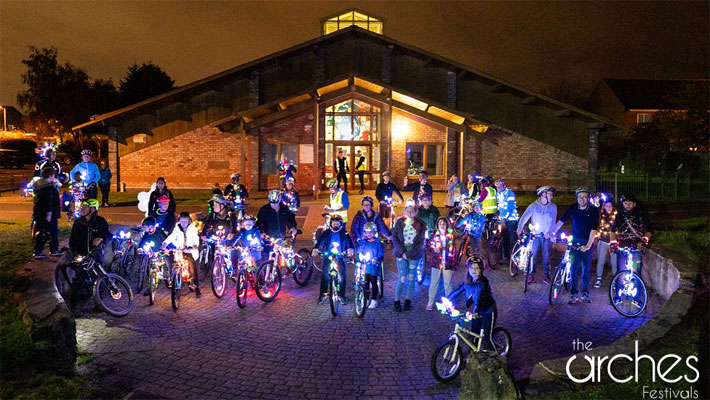 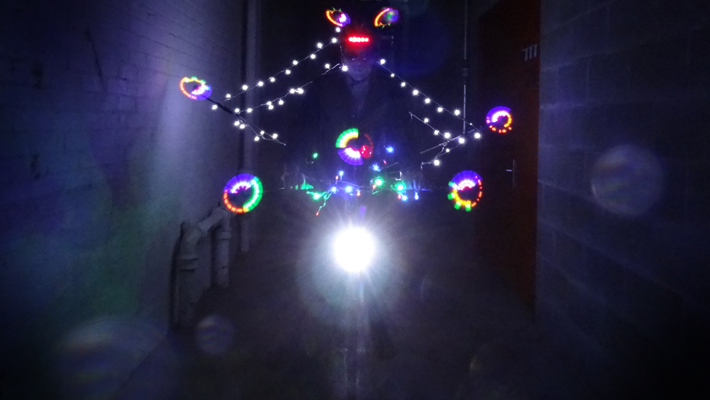 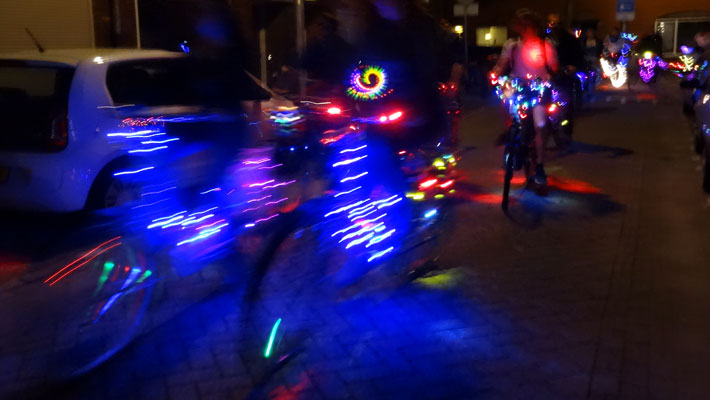 Lullaby is the first artwork Luke has made specifically for young children. As a parent, he is particularly aware that a child’s bedtime is a very special and fragile time of day. Lullaby is a gift to a city, a surround sound illuminated artwork, created by its own citizens and delivered at dusk to the public’s door.

At dusk, when the suburban streets are quiet and empty, a young family wait for the Lullaby to pass by their home. Music can be heard drifting down the streets and a shoal of twinkling lights is seen in the distance, getting closer. Only as the mass of lights pass their house do they realise that the music is coming from speakers attached to 40 decorated bikes producing the most ambient light and serene music.

Watch this film capturing a father and son’s experience.

“Curtains were opened and many people waved as we passed. We even had a round of applause from some families. Some children ran after the bikes waving their own light sticks whilst others just stood with their mouths open, smiling.” said Luke.

Lullaby stems from Luke’s other sleep based projects Sky Orchestra, The Dream Director and his Dream Concerts.
The idea for Lullaby was inspired by an early childhood memory, when each Christmas the local bus company would decorate a double decker bus with lights then drive around villages at night, playing distorted carol music through tannoy speakers. Seen from the other side of the valley it was like aliens were landing. said Luke

The first Lullaby took place in Bristol with Sustrans in 2013. With music composed by established Bristol musician Andy Taylor, the pre-recorded surround-sound music was played from 5 audio speakers mounted onto bikes. With the route advertised in advance through the local paper and with flyers attached to lampposts on each street, many families chose to stay up and wait on the porch, for the Lullaby to arrive at their homes.

Collecting Lullabies
For the presentation of the artwork at the Greenwich+Docklands Festival in London, Lullabies recorded on the public’s phones, were submitted and then woven into a new composition by Dan Jones and Guy Hughes.  They were played in surround sound from the speakers attached to the bikes which passed through the streets of Plumstead at bedtime.

Performed over seven consecutive nights, the artwork was presented in Holland at the Incubate Festival in Tilburg 15-21 September. Watch film. Watch on regional news.

In March 2015, Lullaby was commissioned by Sustrans in Northern Ireland and took place over three nights in different areas of Derry-Londonderry, Northern Ireland. Residents from both sides of the political divide, delivered a Lullaby to those in the opposite community.  Listen to a BBC radio interview.

“You’re coming back next year aren’t you?!”

“I heard the music coming through the baby monitor at home. So I rushed out to watch.”

“As darkness fell, my son was drifting off to sleep with the window open, and Ben and I sat in the living room, working. Suddenly we heard the sound of birdsong and music coming from the top of the street, and raced to the window to watch. Twenty or so bikes, covered in lights, meandered by in the dusky evening, the music getting louder and then quieter again as they passed the house. Ben, with his face pressed up against the glass, had a look of wonder on his face.”

“We could tell they were coming, when we suddenly heard birdsong drifting down the street”.

“It was wonderful watching all the children in their dressing gowns come out of their homes with their parents to watch the procession as we passed by.  You could tell some families had been waiting for us to pass.”

“It made a big impression on my kids who took part in the ride with me, they’ll remember the ride for a long time!”

“It was the highlight of my bank holiday: especially seeing everyone’s faces light up — literally — as we approached.”

“That was such a wonderful experience, I loved every minute.”