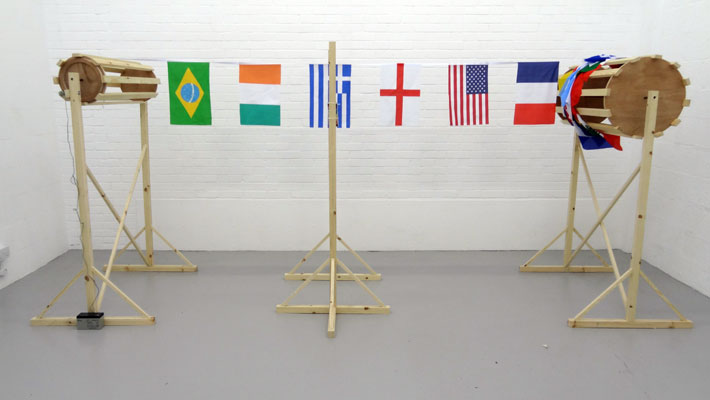 Luke Jerram is currently investigating the history, meaning and use of national flags. This artwork is the first in a series that explores the subject and specifically considers how flags are used to promote and communicate nationalism.

This artwork removes and alters the meaning of flags, by painting them white. White flags have had different meanings throughout history and in different cultures. Currently the white flag is an internationally recognised protective sign of truce or ceasefire, and request for negotiation.

As the desecration of certain national flags is illegal, this the first artwork Luke Jerram has made, which for legal reasons, can’t be switched on (as described below). But when does a sheet of material become a flag? When is a flag, a flag? Must it have the correct colours and patterns or is the recognition as being a specific flag by the viewer the most important thing?

Dr Jon Fox, a specialist in Nations & Nationalism from the University of Bristol said.

“Flags are very provocative things. Flags are symbols, and because they are symbols they are inherently multivalent. They convey all sorts of information and will create different meanings and emotional responses, depending on who is looking at them.

Flags are used to promote a sense of unity. But that feeling of solidarity implies that someone else is not part of that community. So flags are also exclusionary. The more intense the feeling of solidarity and nationalism, the greater the antipathy towards someone else, who doesn’t share that same nation with you. Flags are meant to create unity, but they can make and project disunity depending on how they are used.”

About the artwork Jon said…

“The Flag Machine provocatively but playfully asks us to think about what messages flags convey, and what happens to those messages if we erase them. National flags go into the machine, and out they come on the other side, denuded of their colour and designs, crosses and crescents, stripes and emblems. The flags are not only stripped of all national meaning; they replace that meaning with the white flag of surrender. The flag machine doesn’t desecrate the flag or the nations they represent, it doesn’t burn them, subvert them, or even invert them. It just wipes them clean, taking the many and producing the one, singular flag of global unity. Or does it? Symbols by their very nature are endlessly manipulable so the meaning of this new white flag is in the eyes of the beholder.”

About the artwork the artist Luke said…

“For me, flags are a symbol of nationalism and help to create barriers that exclude people from a particular group. But I also believe they can be also used to create unity between people, and ultimately may result in less internal fighting within a country. So I wonder, do flags and nations create more wars than they prevent or is it the other way round? The European Union was famously created as a way of preventing wars by internal states. I would argue that on balance, this has worked. But how many people have gone to war, waving a flag on behalf of a nation?”

The flag machine is deliberately designed to make it easy for all of the flags to be desecrated. The machine is activated with just one flick of a switch, like firing a gun or dropping a bomb. Maybe if soldiers and politicians had to kill using just their hands, they might think differently about taking someone else’s life?

Here’s Eddie Izzard’s funny sketch about flags and their use.
Truth and Meaning of Jaspar John’s Stars and Stripes.
Here’s Banksy’s comment on the 2012 Jubilee.

Flag desecration is a term applied to the desecration of flags or flag protocol, a various set of acts that intentionally destroy, damage or mutilate a flag in public. Often, in case of a national flag, such action is intended to make a political point against a country or its policies. Some countries have laws forbidding methods of destruction (such as burning in public); such laws may distinguish between desecration of the country’s own national flag and flags of other countries.

Taking legal advice for this art project the artist has chosen not to switch the flag machine on. To switch the artwork on, to spray the flags white could have serious legal implications, which Jerram doesn’t feel he needs to encourage.

please find below the reply from our legal specialists:

“As the questioner has highlighted, there are legal issues concerning the treatment of flags and these vary from country to country. Some countries have laws against the desecration of flags and others less formally have principles which may be regarded as flag etiquette. When this etiquette is over-stepped, those in charge may or may not then invoke other laws such as laws relating to arson, theft, disorderly conduct or even inciting others to commit crimes.

As mentioned above, laws vary from country to country. Q and A can only comment on the laws of England and Wales, where we do not have laws relating to the desecration of flags. We do have flag etiquette and where standards are overstepped, areas of criminal law including those mentioned above may be invoked.

Whether, when or the degree to which criminal laws would be invoked is an unanswerable question; in relation to either in the UK or in other jurisdictions. As the questioner will know, ethical mores and political agendas fluctuate with place (country to country), time and mood; and whether or not someone seeks to point to potential criminality of publicising or using a flag-burning machine will be reflected by those variables, other events and the amount of external pressure at the time.

The possibility or likelihood of criminal/legal machinery being turned on will also be affected by whether criminal acts are actually committed. For example, will people seeing the designs start making flag-machines and burn flags or will the burning or white-washing of flags, albeit fictional ones, encourage others to burn flags and the encouragement and facilitation be seen as a travesty?  The conclusions that will be reached aren’t predictable, especially taking a (subjective) viewpoint that  justice is sometimes seen to be done rather than done, and much can depend on how much damage is done and where fingers can be pointed.

These are the sort of, unfortunately immeasurable, issues which may crop up in the UK. Here, they are tempered with individual rights under the Human Rights Act to freedom of expression, which public authorities would also have to factor in, even if the questioner were burning or defacing the Union Jack.

One method of risk management, to prevent any criminal acts by others being held up to the questioner, would be for the questioner to ensure that wherever he publicises the machine (on his website for example) or if the machine is made and displayed or used, he has clear written notices stating his intentions for this machine and also his non-intentions ie that it is not made to destroy real flags, or to encourage anyone to do so or to make their own machine based on his design for that purpose.

In summary, there is not a definitive answer in relation to the artwork. In the U.K., it appears that the risks can be managed to some degree because they are tempered by the Human Rights Act and also by the use of notices; however this is not water-tight for the reasons given above.”

I hope this is useful in replying your query.
Best Regards,
Artquest

Here are some Interesting references: